Honeycomb is made from beeswax and used by bees to store honey. Honeycomb has a unique hexagonal shape and is filled with unfiltered honey. The entire honeycomb, including the gooey honey inside, is edible! In this article, we will tell you what honeycomb tastes like and if it is okay to eat honeycomb. Let’s get started.

Is honeycomb just wax? Honeycomb is made from beeswax (waxy secretions of worker bees). The bees secrete wax and use it to create a safe structure to house honey, their larvae, and even the royal jelly.

While honeycomb sounds fancy, it is 100% beeswax. The bees produce hexagonal-shaped containers which are linked together to form the honeycomb. Glands under the stomach of bees naturally secrete the wax. The honey is then injected into these cylinders and kept secure by an additional layer of wax. So if honeycomb is just wax, does it also taste like beeswax? Let’s find out!

Honeycomb has a sweet taste but not nearly as sweet as honey. It has a slightly crunchy and chewy texture that tastes like you are eating honey-flavored gum or wax candy. Honeycomb has a floral flavor, and you can taste hints of fruit and even slight smoky notes.

Do you want to take your honey eating experience to the next level? Then you need to grab some honeycomb! Honeycomb has a waxy texture which is chewy and slightly crunchy. The more you bite into it, the chewier it becomes, almost like bubble gum!

Honeycomb has an incredible sweet honey flavor, and you can taste a variety of flavors, such as flowers, spice, caramel, vanilla, and even grass! Depending on the bees, honeycomb can also have a nutty flavor. There are few better experiences than biting into a big chunk of honeycomb filled with raw honey and tasting the gooey sweetness of the honey combined with the waxy texture of the honeycomb. It tastes like an all-natural and healthy wax candy with some added crunch!

Is honeycomb bitter? Honeycomb is not bitter at all. Instead, it has a mild honey taste. If you eat honeycomb with honey inside, it is incredibly sweet and tastes like pure honey with a waxy texture which, if you keep chewing, turns into honey-flavored gum.

Honeycomb with the honey removed is not bitter. Therefore, it won’t have much flavor and will taste like beeswax with a very slight sweet taste. However, if you eat a honeycomb that is jam-packed full of honey, you will experience an incredibly sweet flavor that is almost too sweet to eat by itself. Once the honey dissolves, you are left with a waxy honeycomb that will stick to your teeth. If you keep chewing the honeycomb, it will turn into gum. 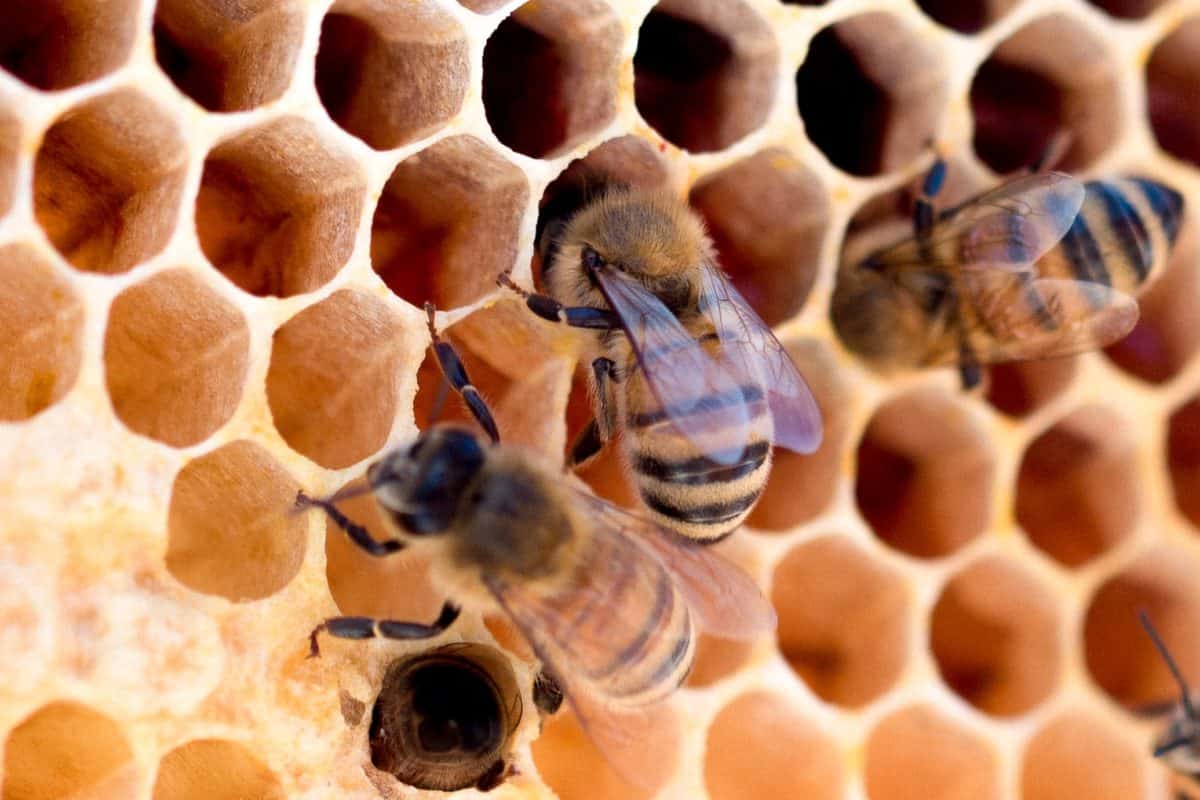 Is honeycomb really sweet? Honeycomb by itself is mildly sweet. However, when eaten with raw honey inside, it is incredibly sweet and tastes like crunchy honey with a waxy texture.

Honeycomb is not very sweet because it is just beeswax. The sweetness comes from the raw honey, which is oozing out of the honeycomb and is squeezed into every cell. Eating honeycomb alone is not recommended because it does not have enough flavor and is too waxy. You should eat a honeycomb with the raw honey still inside. This way, you get to enjoy the amazingly sweet taste of honey combined with the waxy and slightly flaky texture of the honeycomb.

Does honeycomb taste like wax? Honeycomb with the raw honey removed does taste like wax. It only has a very mild sweet flavor and has slight hints of floral. It has a slightly crunchy and waxy texture which transforms into gum when you start chewing.

Honeycomb has a subtly sweet flavor, and depending on the bees, you can taste flowers, vanilla, woody notes, and even grassy flavors. Honeycomb is not particularly tasty just by itself because it lacks flavor and does taste similar to standard beeswax. Honeycomb needs to be eaten with raw honey inside. This way, it tastes like wax candy with gooey and incredibly sweet honey inside.

Caramel is not a flavor that comes to mind when chewing on honeycomb. Honeycomb by itself does not taste like much. You can only really taste honeycomb when it is dripping with honey. When the honeycomb cells are filled with raw honey, you get amazing honey flavor combined with a slight crunch and waxy consistency.

What does beeswax taste like? Beeswax by itself does not have any flavor. However, when you eat it with honey inside, you will taste incredibly sweet honey combined with a crunchy and waxy texture. It is similar to wax bottle candy but with honey inside!

While you can eat beeswax, we only recommend eating it if it is filled with honey. This is because plain beeswax does not have any flavor and just tastes like a chewy ball of wax with a bit of a crunch. However, beeswax does taste amazing when it is overflowing with raw honey as you get to enjoy incredibly sweet and gooey honey while at the same savoring the crunchy and waxy texture of the beeswax. If you have never tried beeswax filled with honey, you are missing out! What Is the Texture of Honeycomb?

Honeycomb has a slightly crunchy and flaky texture but is mostly waxy. Honeycomb has been described as having a similar texture to wax bottle candy. Also, when you start chewing honeycomb, the wax starts to break down and turns into a gum-like consistency.

Ever tried a wax bottle candy? That is what honeycomb tastes like! Honeycomb also has a bit of crunchy texture. Even more interesting, once you start biting into the honeycomb, it turns into honey-flavored gum!

Is It Okay to Eat the Honeycomb?

It is perfectly safe to eat honeycomb. People have been eating honeycomb for thousands of years! Honeycomb is healthy and can improve liver function and heart health and even protect against infections. Just be careful not to eat too much as it can cause stomach blockages.

Don’t worry, you can eat honeycomb guilt-free! Honeycomb is a 100% safe snack that you can eat at any time. Honeycomb also has a range of health benefits such as:

What Do You Eat Honeycomb With?

Honeycomb goes amazingly well on a slice of toast or with cheese. You can also lather some honeycomb on fruit like pears, apples, or apricots. Alternatively, you could eat honeycomb with yogurt or cereal for breakfast.

See also: What Does Miso Soup Taste Like? The Unique Flavor Will Be Revealed!

Honeycomb is pretty versatile and goes with everything that honey pairs well with. We love eating honeycomb on a slice of toast with butter for breakfast. It is also great to mix with Greek yogurt with strawberries and blueberries. If you want to combine sweet and savory, you can eat honeycomb with ricotta or other cheeses.

Honeycomb on its own is not very flavorful because it is beeswax. However, when honeycomb still has raw honey in its cells, it is incredibly sweet and tastes like the best honey you have ever tasted combined with a slightly crunchy and awesome waxy texture. If you want to truly enjoy honeycomb, we recommend eating with ricotta cheese or adding to Greek yogurt and a mixed fruit bowl.

Do you refrigerate honeycomb? Honeycomb does not need to be refrigerated. The ideal way to store honeycomb is in a sealed box at room temperature, away from direct sunlight. You can store your honeycomb on a kitchen counter or in a pantry cupboard.

Don’t worry about storing your honeycomb in the fridge. The recommended way to store honeycomb is to place it in an air-sealed box and place it in your pantry. You can also store it out on a countertop but try to keep it away from sunlight. Remember that it needs to be kept at room temperature; otherwise, it can spoil!