Scallops are distributed in almost all seas and oceans at a wide variety of depths. The meat of scallops was considered a delicious dish by the ancient Greeks and Romans. Currently, scallops are eaten in almost all countries of the world in fresh, frozen, canned form. Scallops inhabit all oceans of the world, with the largest number of species found in the Indo-Pacific region. But where do the best scallops come from? Read on.

Where are the best scallops from?  The best scallops are found in Japan, Russia, Canada, Iceland, Norway, South Greenland, and the Atlantic coast of North America. Alaska’s scallop is renowned for its large size, sweet taste and mouth-watering meat and lives up to its reputation as the freshest and finest scallop in the world.

Which country scallop is the best? Japan and the USA are the countries with the best scallops. Aomori is a city and port in Japan, famous for its scallop fishing industry since ancient times. The Alaskan scallops are also one of the best scallops in the world, thanks to their sweet, nutty, creamy taste and nutritional value.

Which Scallops Are The Best?

Which scallops are the best? The Alaskan scallop harvested in the Gulf of Alaska is the best. The meat is sweet and tender and can be used to make a wide variety of gourmet dishes, whether grilled, skillet or over an open fire. The Alaskan scallop is not artificially processed and contains no food additives.

The Alaskan scallop is renowned for its soft, sweet taste, dense texture and low moisture content. After fishing, Alaskan scallops are immediately removed from their shells by hand and frozen directly in the sea, which ensures that scallops are always available frozen throughout the year.

Similar in size, appearance, taste, and texture, Alaskan scallops are sorted by size to be used in a wide variety of dishes. Larger scallops are used for excellent appetizers or main courses, while smaller scallops are great for grilled pasta and seafood platters.

The meat of scallops has long been considered a tasty and delicious dish, and even the ancient Greeks and Romans always highly appreciated it. In almost all countries of the world, especially in coastal and island countries, scallops are eaten both fresh and frozen, canned and dried. Almost all types of large coastal scallops are harvested. Some of the popular scallops include the large scallop (Pecten Maximus), the scallop of St. Jacob (Pecten Jacobeus), scallop Pecten (Placopecten) in the Atlantic Ocean, and others. 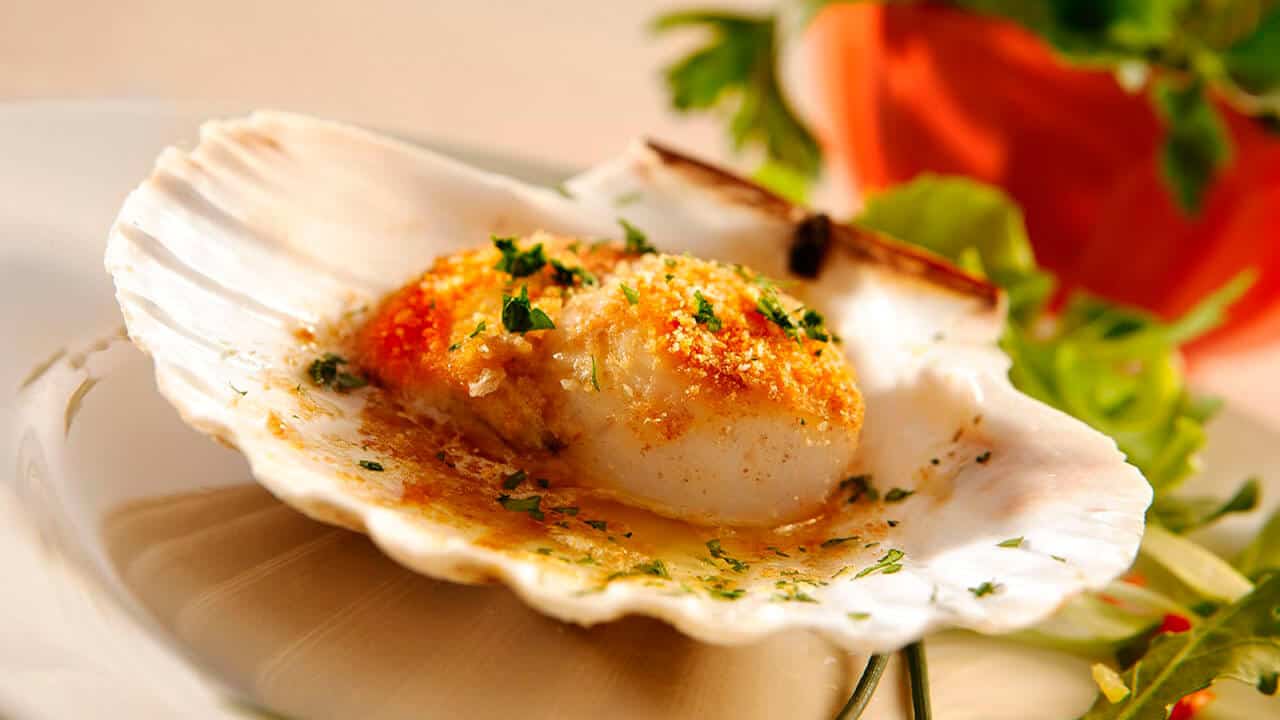 Scallops are found in the marine environment around the world, from the tidal zone to the deep sea. Most prefer seagrass beds in the shallow sandy bottom, although some are attached to rocks or other substrates.

In the United States, several species of scallops are sold as food, but two prevail. Scallops of the Atlantic Sea are mined in the wild from the Canadian border to the mid-Atlantic and found in shallow open waters. Smaller scallops are found in estuaries and bays from New Jersey to Florida.

There are large populations of scallops in the Sea of ​​Japan, off the Pacific coast from Peru to Chile, and near Ireland and New Zealand.

Scallops come in two classes Lamellar-gill or Bivalve. This marine family has about 350 species, and only three genera are edible: Spondylus, Lima and Pecten. Depending on the species, the depth of its habitat is different. It can be an eight-kilometre trench, and shallow water. Whatever the depth, the scallop lives, buried in the bottom soil. The most favorable climate for scallops is temperate and subtropical.

Scallops are made up of water and protein. That is why scallops are perfect for those who want to lose weight. The meat of scallops is tender, soft and juicy. The taste of the mollusk is influenced by the water in which it lived, or rather, the percentage of salt in it.

The scallop is a valuable commercial species. Scallops inhabit the coastal zone, on placers of stones and sandy soils; they lie on the surface or are buried a little in the ground. Some species live in deeper places. The scallop is inactive, which is facilitated by a small but thick shell.

Chinese scallops are generally more attractive in appearance. They are large, white and uniform in size. And they are often cheaper. But such scallops can only be obtained through artificial cultivation. They are not useful; on the contrary, chemicals and heavy metal additives are often used in production.

Russian Far Eastern scallops, in turn, are harvested naturally, right in the sea. They are caught near the shores of Kamchatka. They are smaller, darker, but they contain all the benefits invested by nature itself. Kamchatka scallops have a delicate sweetish taste, and in structure, they are a bit like crab meat.